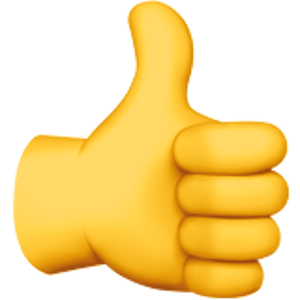 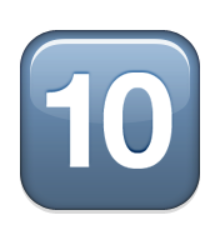 We just released an easy and powerful new Cloverpop for Slack feature -- build buy-in fast by asking people how likely they are to support your decisions. It’s quick, inclusive and guaranteed to improve the quality of your decisions.

To see for yourself, just Add Cloverpop to Slack and type the ‘/cp announce’ command from anywhere in Slack.

Now when you announce decisions using Cloverpop for Slack, you’ll see a new option proven to increase decision buy-in, which of course defaults to Yes.

Everyone in every channel who receives your decision announcement will see an option to “Rate Your Level of Support.” Clicking this brings up a modal where they can rate their support for the decision from 0 to 10 and add a comment to cheer the decision on or explain their concerns. 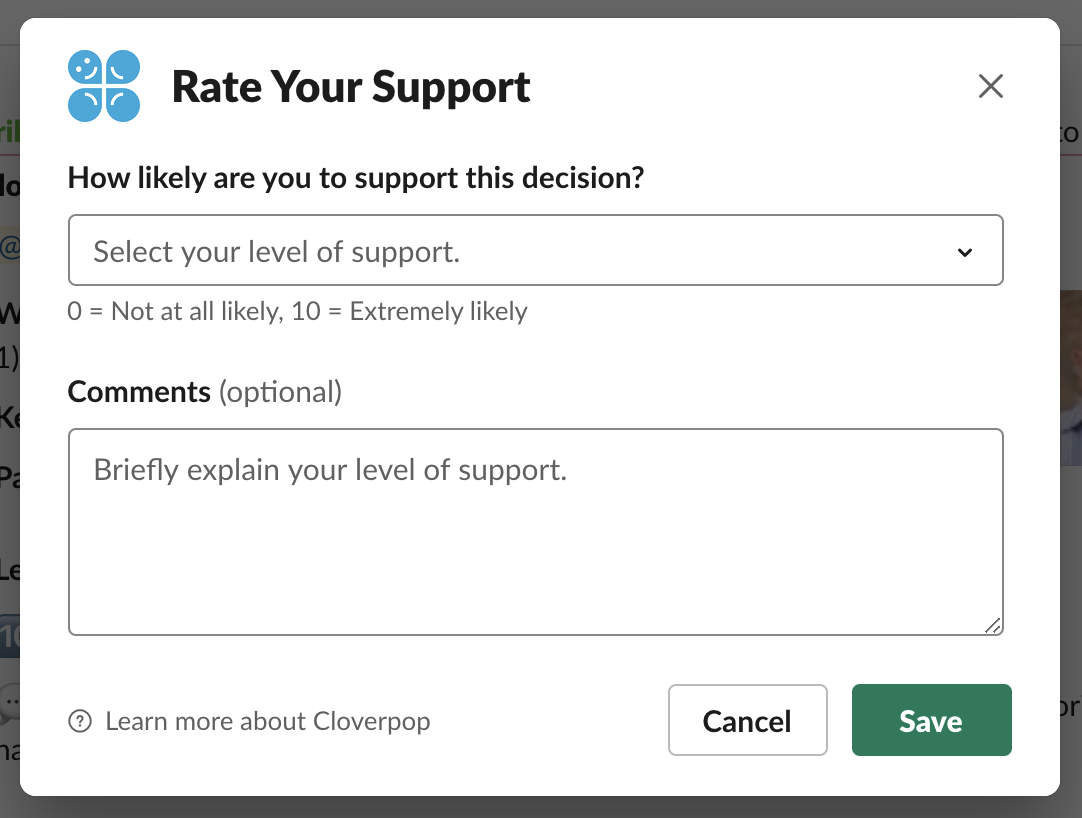 Since these ratings are attached to the decision, everyone across all the channels can see them without having to click around to a bunch of separate message threads 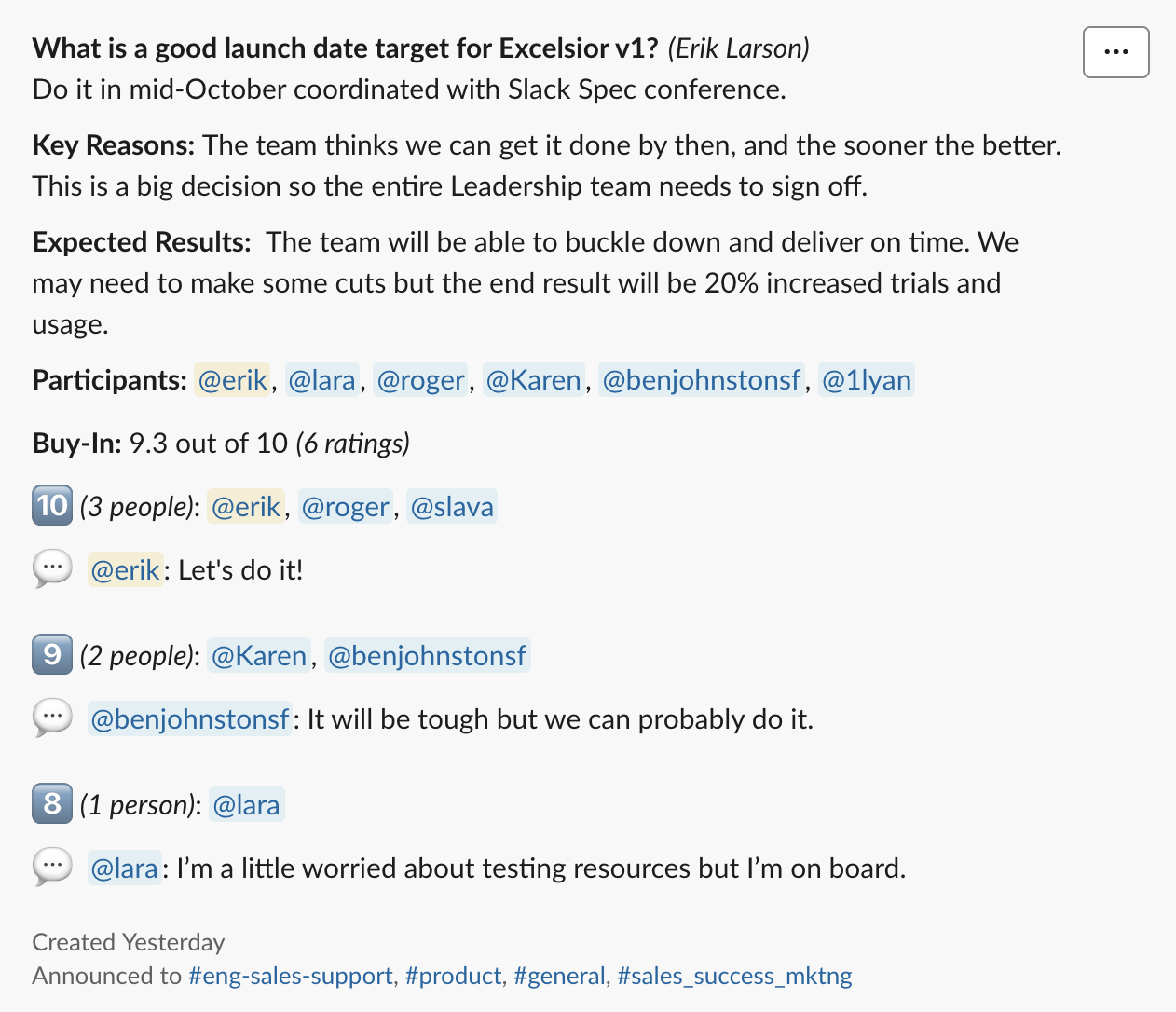 From Broadcasts to Feedback Loops

We didn’t realize the power of this simple feedback loop until the customer showed us, but we quickly figured out the magic of what they were doing. They had switched from treating decision communications like one-way broadcasts to using them as self-correcting feedback loops.

Over the past few months, we’ve teased out the main reasons why this super-simple decision feedback loop is also super-powerful:

Better decisions, more inclusive, fast and easy. What’s not to like?

We had three big worries about this idea, but it turns out they don’t get in the way in the real world. Here’s why:

Potential Problem: Once we decide, decision-makers don’t want input, we want action.
Reality: But we really want results. Often our mentality after we make a decision is something along the lines of “Damn the torpedoes, full speed ahead!” The idea of “opening up a decision” for feedback feels like a step backwards. But in reality, most of the time it improves understanding and speeds up execution of the original decision, delivering better results. And if someone happens to point out a torpedo in the water, most decision-makers are happy to change course and avoid it.

Potential Problem: Most people are afraid to share views that go against the group.
Reality: But they still want to do it softly. That is why we ask people to rate how likely they are to support the decision from 0 to 10, versus some version of thumbs up / thumbs down. This wide range gives people wiggle room to support a decision even when they have reservations or disagree with it. This range lets people voice opinions as loudly or softly as they feel comfortable with, and it works across individualistic Anglo-Saxon and collectivist Asian cultures, from engineers to salespeople, from executives to individual contributors.

Potential Problem: Companies are not democracies.
Reality: But asking people to rate their level of support for a decision is not a vote. The wiggle room of a 0 to 10 rating also helps make it clear that decision authority still resides with the decision makers. It is more like a score or prediction of success than a vote, and decision-makers can still decide what action to take, if any, based on that input.

While it turns out that the “wiggle room” of a broad scale helps the feedback loop run smoothly, we originally picked a 0 to 10 scale by modeling off of the time-honored Net-Promoter Score used for measuring customer satisfaction. And we found that it works here in a similar way, with different ranges having different meanings. Here’s an easy way to interpret what people’s scores mean:

9 to 10  They are fully on-board with the decision.

7 to 8  They have concerns but are on board and support the decision.

5 to 6  They have very serious concerns and are not bought in but want to find a way to make it work.

0 to 4  Much like pulling an andon cord on a manufacturing line, they are saying that something is severely wrong and the process needs to stop so it can be corrected...or rarely, they are rebelling and trying to throw sand in the gears. Either way, it’s better to know.

Here are two examples of how this works for our customers in real life.

In one example, leaders made a decision to change a training certification policy. For dozens of countries around the world the change worked fine, but it turned out that one region lacked the needed equipment. The decision-makers got this feedback within hours of communicating the decision and were able to quickly adjust the policy. This saved time and money, and avoided alienating an entire continent.

In another case, a technology leader shared the new mission statement she’d decided on with eighty managers, roughly, “We’re going to be the best in the technology industry at what we do.” Everyone was on board and ready to win...except one person who asked “Why limit ourselves to just our industry, when there is a lot we can learn from other industries?” This brought an expanded view of their mission that helped boost innovation, and showed agile, inclusive leadership.

Try It And See For Yourself

The best way to see the power is to try it yourself. Just Add Cloverpop to Slack and type the ‘/cp announce’ command from anywhere in Slack. Let us know what you think!

Want to try Cloverpop but can't add apps to your own Slack workspace? Here's what to do.