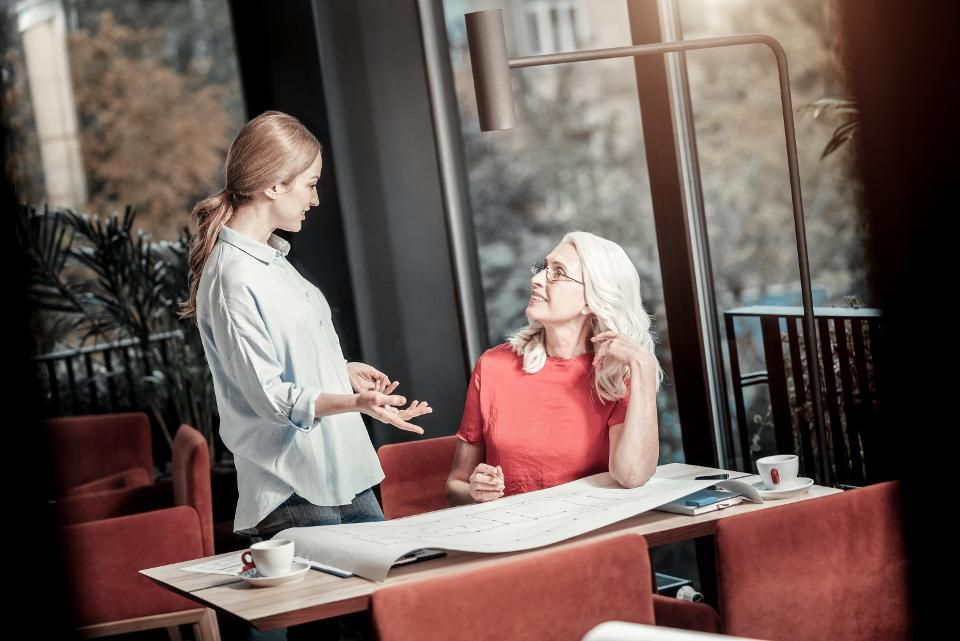 Is it better to have “up-and-comers” or “more seasoned” employees making decisions at your company?

It turns out the best answer is a mix of generations, and it’s a wake-up call to companies everywhere, from a tech industry enamored of young workers to global enterprises managing large aging workforces:

Decision-making teams that include a wide range of younger _and_ older employees significantly outperform more narrowly young or old teams. These multi-generation teams are more likely to identify better choices and deliver results that meet or exceed expectations.

Mirrors Don’t Lie, And Neither Do Numbers

Extending our previous decision-making study, in this research we analyzed the effects of age on 300 business decisions made by approximately 100 different business teams in a wide variety of companies over two years. The typical decision-making team involved 5 or 6 people. The decisions were managed and tracked using the Cloverpop digital decision platform, and aggregated and anonymized for this research.

I don’t want to bury the lede. As shown in previous research, teams far outperform individual decision makers. But when we looked at how the ages of the people involved affected team decision making, the results were not what we expected.

First, we analyzed how often team decisions had positive outcomes by tracking whether the results of the decisions met or exceeded expectations. Slicing the data by typical team member age revealed the first surprise:

So much for the wisdom of experience -- it looks like the creative younger decision teams trounced the wise older ones. That was a big surprise to me and my shiny graying head. What is going on?

Unlocking The Wisdom Of Experience PLUS The Creativity of Youth

It’s easy to stereotype and speculate that maybe older teams take on tougher problems, or perhaps the exuberance of youth inflates the younger teams’ results. Both sound plausible. But a different story emerges when considering how decision-making outcomes are affected by the range of ages: 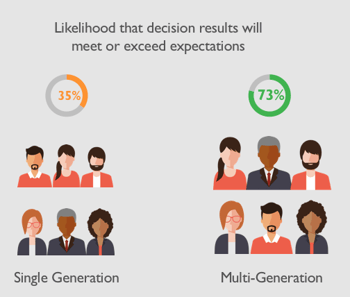 That is a whopper of a result. Multi-generation decision teams were 2X more likely to meet or exceed expectations -- that is a management lesson for the ages, literally. When it comes to decision-making at work, it sounds like the combination of youth plus experience is the most creative mix of all.

This gave us a hunch about the mysterious missing wisdom advantage that appeared to be holding older teams back. We sliced the data one last time to sniff out how team age and age range were related:

So the mystery is solved. It’s not that older decision-making teams get bad results, it’s that multi-generation teams get great results, and for some reason, older teams are much less likely to be made up of people from multiple generations.

Why does this happen? And since companies want more wise and creative decisions with excellent results, how can they activate more multi-generation teams?

The strong positive performance of multi-generation teams in this study was unexpected because the research into the young and old working together is decidedly mixed.

A 2017 BCG study found that manager age diversity has a negative impact on company innovation. Amazingly, every other diversity measure in their study was positive. A 2012 research review found a mixed bag across over 50 studies. Age diversity brings a broader range of perspectives and skills (good), but also different sets of goals and difficulty communicating and building trust across age-groups (not good).

But at work, these differences exist in a shared context. Everyone working together inside a company has shared history, values and goals. In fact, more and more research shows that the hype around the generational differences between Millennials, Gen Xers and Baby Boomers is mostly fact-free clickbait. At the root of it, young and old workers have remarkably similar career goals, work attitudes, and learning patterns.

As with so many work insights these days, it is not our differences but our biases that are the biggest barriers blocking multi-generation teams.

When making decisions together, we regularly fall for false expertise. This causes people to unconsciously defer to the most experienced and extroverted people in the room, ignoring other inputs or failing to surface their own ideas and information.

If we have a choice, we prefer to work with similar people, and that includes people of similar ages. Since more experienced workers are more likely to be given the lead on decision-making teams, it’s not surprising that they build teams of people born around the same time they were.

When our human capabilities fall short, we use tools for leverage. In these days of digital transformation, more often than not that means software. Which brings us to the final piece of this puzzle.

To track all the data required for this research, the decisions in our study were made using our Cloverpop digital decision platform. The teams used Cloverpop to record, communicate and track the decisions they made.

Importantly, the decision makers also used Cloverpop collaboration workflows to frame up their decisions according to best practices and then invite team members to give input in writing before getting together to discuss in person.

That digital process leveled the playing field across young and old team members, giving everyone equal ability to advance their own ideas and consider others’ perspectives. The teams were nudged in a better direction, helping to avoid their unconscious biases and unlocking their multi-generational power.

As people live longer and more productive lives, the range of ages in the workforce continues to expand. At the same time, the digital transformation of work is bringing new tools and systems to solve old problems and create new opportunities. It’s time to purposefully combine those two trends and unlock the power of multi-generational decision-making teams at work.

Read more research in our diversity and inclusion white paper, or contact us for a Cloverpop demo to learn how to put the platform into action as part of your company's digital transformation efforts.

An earlier version of this article was published on Forbes.

How Tech-Savvy Executives Can Accelerate The Decision Cycle

How To Use Inclusive Decision-Making To Drive Innovation And Performance