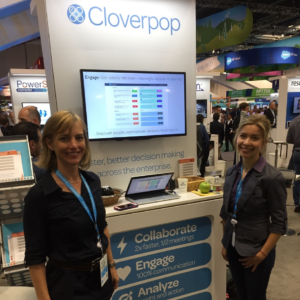 We weren’t planning to exhibit at Dreamforce Cloud Expo until we learned that Cloverpop was selected as one of ten top semi-finalists for the Dreampitch competition. That was a big deal, and it started us thinking - maybe we should get a booth.

Not surprisingly, we did a decision about it in Cloverpop. Here's what we decided:

It wasn’t an obvious choice - funds were tight, we weren't integrated with Salesforce, and we only had a couple of weeks to prepare. But we did it, we rocked it, and we learned a lot along the way.

1 - Business people come to Dreamforce to find B2B SaaS solutions to buy. That may sound obvious. But after many years’ experience at many other conferences, I was surprised at how eager people were to have their badges scanned to become leads. Maybe I shouldn’t have been surprised, since decision making is the most important business activity, and our product is awesome.

2 - Not everyone asks about Salesforce integration. There is a truism out there that you shouldn’t exhibit at Dreamforce if you aren’t integrated with Salesforce. To be clear, we run on Heroku, and we plan to integrate with Salesforce, but we haven’t done it yet, since our customers haven’t asked for such integration. Potential customers did ask about it quite often, but it was not a blocker once they understood how the Cloverpop decision-making process works. BTW, our Decision API is coming.

3 - The first day is awesome; the free days aren’t.

The dynamics on the expo floor definitely change throughout the week. Tuesday was fantastic - the floor is only open to full-price attendees, which makes for lots of buzz and energy and lots of great conversations. Friday was a bust - our VP of Marketing spent a good bit of time shooing freeloaders away from our awesome tchotchkes and yummy chocolate.

4 - You can definitely negotiate the price, a lot, probably. We were able to negotiate the booth price down by about 50%, with the caveat that we signed up for the booth pretty late in the process. I imagine our negotiating leverage would have been less early on. And we were a lowly startup, so maybe they took pity on us. But we saw at least one unsold booth...so, as in all business, if you don’t A-S-K, you don’t G-E-T.

5 - It’s worth it if ~100 ok leads and ~10 great leads are worth it. Since we aim for deals $25K and above, one deal is enough to justify our direct cost, and 2-3 deals will cover everything. Beyond that, a few of our conversations have high potential for bigger deals at large enterprises and government agencies. So we don’t want to count our chickens before they hatch, but it feels worth it, especially after negotiating the price.

6 - It’s almost worth it just to hone sales messages and onboard salespeople. So far we’ve mostly had inbound interest, but Dreamforce gave us a chance to practice outbound selling. Pitch your solution to a hundred potential customers in a week and you learn a lot. We had a new salesperson join us at the booth the second week on the job, and she got a great firehose exposure to customers, and a great opportunity to listen to and practice our pitch.

7 - The “Partner Theaters” are a tough place to present.

I watched several in the days leading up to ours, and the energy was pretty bad - maybe 10 people on average at each presentations mostly doing email and ignoring the forlorn presenters. So I really went overboard on the energy and imagery, which went well and leads to...


8 - People want to be excited and amazed. Cloverpop excites and amazes. Our presentation came from our ground breaking decision making research we published in the Harvard Business Review. It was serious stuff. But the presentation itself was a wild carnival ride, and the excitement drew people in for the story of a new way of working. Our team makes decisions twice as fast with half the meetings and 100% visibility. And that makes for a great life at work. Mic drop.

So, should you exhibit at Dreamforce? Your mileage may vary, but we got a lot out of it this year. Will we do it next year? We’ll see. I’m not too worried about it, since I’m sure we’ll make another great decision when the time comes.

It's Official! Cloverpop Raises $6.2M for Our Mission to Eliminate Meetings and Speed Up Decision Making Using Behavioral Science