New Webinar: How To Transform Decision Practices At Your Company 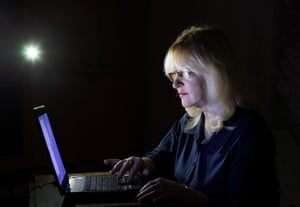 It’s 9 pm in Zaporizhzhia, Ukraine. Natalia, age 58, is sitting in the dark in her tiny kitchen. The only light is coming from her laptop screen. It illuminates her face and reflects in her glasses. She is not immersed in social media, she is attending a company meeting. Natalia is the newest member of the development team at Cloverpop - B2B SaaS startup based in San Francisco.

How did she go from a happily retired grandma to a full-time developer? The journey started out rough.

One year earlier, Natalia found herself slowly but surely sinking into depression. She was caring for her elderly, gravely ill parents and it was taking a toll. “I had a choice,” Natalia told me - to feel sorry for myself, or to switch my mind to something useful”.

Natalia’s son Anton, who is a software developer, suggested that she try her hand at programming. Natalia was up for it. With her Mom lying on her deathbed in the next room, Natalia dove into free online courses that taught the basics of software development. She took lesson after lesson - c#, java, PHP, Ruby and eventually - Ruby on Rails. “It was like magic - you can write something in the text editor, combine with the browser - and beauty! you can create something!”.

Natalia’s first real development project was an app that helped calculate the calorie count of her go-to dishes. Then came an offer to take part in an internship program at Cloverpop for women interested in becoming Ruby on Rails developers. Natalia jumped at the chance.

I talked to Roger Graves, Cloverpop CTO, about the Internship program and how Natalia earned her spot on the development team:

What were your thoughts behind the internship program?

I realized that our team was not diverse enough. We know that we need diversity to make better quality decisions and foster a good culture. We have had a lot of success developing talent and I thought, let’s solve our diversity problems by finding talented, driven women who have the potential to become first-class developers, but they don’t have the experience or the immediate skills. We’ll create the environment to help them learn fast and see how it goes. Even if one person came out of that who added diversity and talent to the team - it would be worth it. The interns were able to do real work after a month. They were able to do simple tasks, which freed up more experienced team members to spend their time on more complex projects. At the end of the program, we hired people based on our projected needs a year from now and beyond.

What about Natalia? Did you have any reservations about including her in the internship program?

Natalia had by far the least amount of programming experience compared to other interns. 3 others had spent at least 5 years working in different stacks, just not Ruby on Rails or web application programming. She came in as somebody who was taking tutorials and trying things out on her own. The only thing we knew is that Natalia was smart and she learned quickly. She had started businesses in the past, ran successful import-export operations - she definitely had the raw materials. I figured - why not give her a chance? Worst case scenario, after a few months she’ll learn some things and go on to do something else.

Did you have any concerns about Natalia’s age?

The only concern I had about her age is if she is really going to want to put in the effort that would be needed to become a programmer. She doesn’t need to do this, there is no financial pressure to spend all this time learning and becoming a complete beginner. I was wondering if after three months of it she would say - that was interesting, but I don’t want to start a new career, working insane hours, being paid modest wages. Not many older people can take the ego hit of becoming a beginner at something, let alone the demanding and time-consuming, hard dedication work it takes to become a software programmer. I just wasn’t sure she would find it fun enough to endure the grind. When I offered her a full-time position I wasn’t sure if she would take it. I would have been very understanding if she said - Ok, that was a fun experience, I’m going to go back to being retired and sipping margaritas. But she says she loves doing it.

What do you think is the biggest thing we can take away from this?

A lot of times we construct our own limitations - this is a classic example. If you were to try to predict, who would be the most likely to start a career as a programmer, and do well, it would not be a retired grandma from Zaporozhye, Ukraine.

When I myself have self-doubts, fears, can I do this? This is an inspiration to think about. If she can do - why can’t I?

From a managing standpoint another lesson is - don’t assume people can’t do things. If you give them a chance - they’ll surprise you sometimes.

You mentioned diversity - how does Natalia help in this respect?

There are 3 diversity metrics that we track - gender, age, and geographical location. Natalia is a diverse element in all 3 of these categories for us. It’s a huge win to not only have a promising, competent engineer, but also somebody who brings the perspectives that are so different and unique for software development teams. Adding someone like that on the front lines is massively valuable.

Together with the rest of the dev team, Natalia is now focused on learning React and keeping product team busy “feeding the beast” (filling dev team pipeline). She enjoys every day of her new career and firmly believes: “We can’t relax, can’t let ourselves become depressed, and let the world know that we are defeated. The biggest problem is that people think they can do it all in the future. You have to do it all here and now, tomorrow might not come. I started from zero many times - this is just another time!”

New Webinar: How To Transform Decision Practices At Your Company